On the basis of the agreement of point of view, directions and specific measures, Vietnam and Switzerland believe that both can further promote economic and trade cooperation in the future. and soon achieve good results in the negotiation and signing of the Free Trade Agreement between Vietnam and the European Free Trade Area (EFTA), of which Switzerland is a member.

On August 5th, 2021, Minister of Industry and Trade Nguyen Hong Dien had a working session with Mr. Ignazio Cassis - Vice President and Minister of Foreign Affairs of the Swiss Federation within an official visit to Vietnam from August 4th, 2021 to August 6th, 2021. 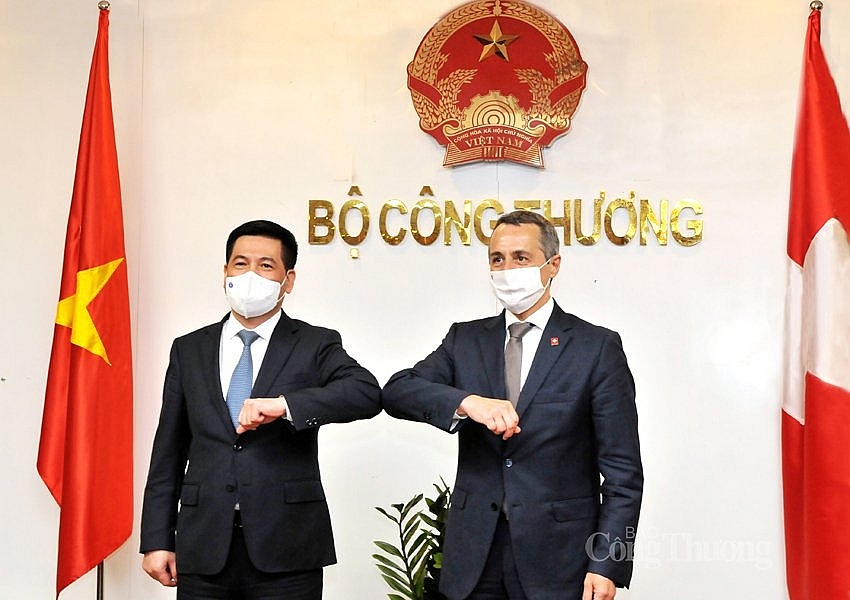 Minister of Industry and Trade Nguyen Hong Dien and Mr. Ignazio Cassis – Vice President and Minister of Foreign Affairs of the Swiss Federation
At the meeting, Minister Nguyen Hong Dien said that over the past 30 years, Switzerland has supported Vietnam's socio-economic development through non-refundable aid, including development assistance projects. commercial and industrial development for the Ministry of Industry and Trade.

This has shown the strong development of bilateral trade and investment relations between Vietnam and Switzerland. According to Swiss statistics, the total two-way trade turnover in the last 5 years, including 2020 has always achieved an average growth rate of nearly 20% per year. More and more Swiss companies are investing and doing business in Vietnam. Among the large Swiss corporations investing in Vietnam can be mentioned Nestlé (food and beverage), Novatis/Ciba-Sandoz (pharmaceuticals), Roche (pharmaceuticals), ABB (electrical equipment, construction) transformer station construction), Sulzer (mechanical, electrical equipment), SGS (inspection), Escatec (electronic equipment), Ringier (printing), André/CIE (commercial) and some others.

These enterprises not only create about 20,000 jobs for the Vietnamese market, contribute to the state budget every year, but also apply modern management methods, training, and technology transfer to improve their skills. labor and production capacity of the domestic industry. As of June 2021, Switzerland has 172 projects with a total registered capital of 1.9 billion USD, ranking 20th out of 140 countries and territories having direct investment capital in Vietnam.

On the Swiss side, Vice President Ignazio Cassis also highly appreciated the close cooperation of the Ministry of Industry and Trade of Vietnam, especially the active participation in the negotiation process of the Free Trade Agreement between Vietnam and the EFTA. of which Switzerland is a member. At the same time, he expressed his hope that the negotiation process for the Agreement would continue to be accelerated, the two sides would reach an agreement and resolve any remaining issues, towards the conclusion of the negotiations as desired by the senior leaders of the two sides.

Regarding this issue, Minister Nguyen Hong Dien pledged to directly direct the technical level to cooperate closely with Switzerland and soon conclude the negotiation of this Agreement in the near future.

On this occasion, Minister Nguyen Hong Dien also expressed his thanks to Switzerland's support in supporting the Ministry of Industry and Trade in implementing the technical assistance project "Trade policy and export promotion". This is one of the key projects in Switzerland's cooperation strategy 2021-2024 on Vietnam's economic development.

“The cooperation strategy implemented by the Swiss Government is very consistent with the strategic orientations of socio-economic development in the next 10 years of Vietnam in general and the Industry and Trade sector in particular, especially the Project on Restructuring structure of industry and trade in the period of 2021-2030" - Minister Nguyen Hong Dien affirmed. 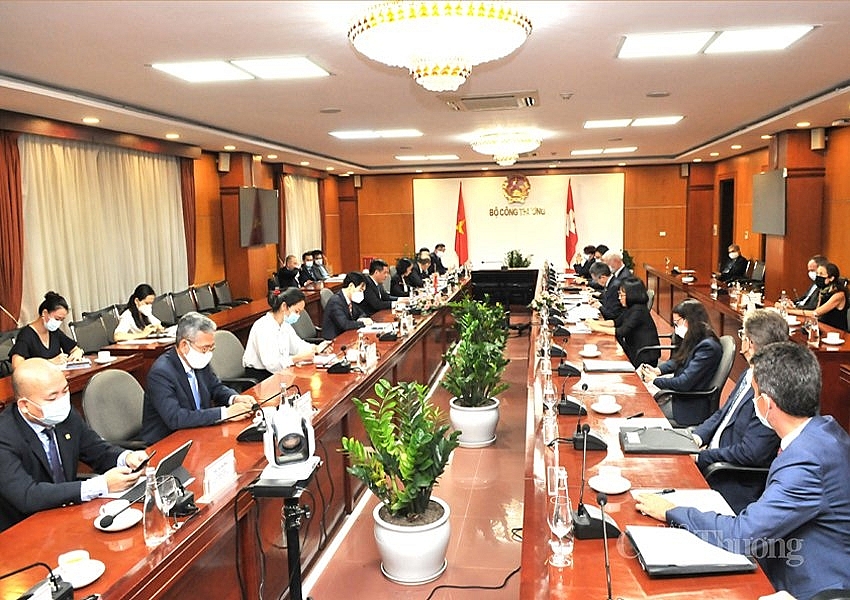 The total two-way trade turnover between Vietnam and Switzerland in the last 5 years, including 2020 has always achieved an average growth rate of nearly 20%/year.

At the meeting, Minister Nguyen Hong Dien hoped that Switzerland would continue to support and prioritize support to effectively promote cooperation programs and projects in the fields of industry and commerce. In particular, Vietnam's goal in developing fundamental industries such as materials, chemicals, processing, manufacturing and supporting industries ... aims to increase the participation of Vietnamese enterprises and Vietnamese products in the global value chain.

At the end of the meeting, the two sides affirmed to continue working closely to promptly solve arising problems, as well as effectively implement cooperation activities between the two sides, contributing to promoting the relationship. Vietnam-Switzerland trade economy goes deeper, more practical and effective.